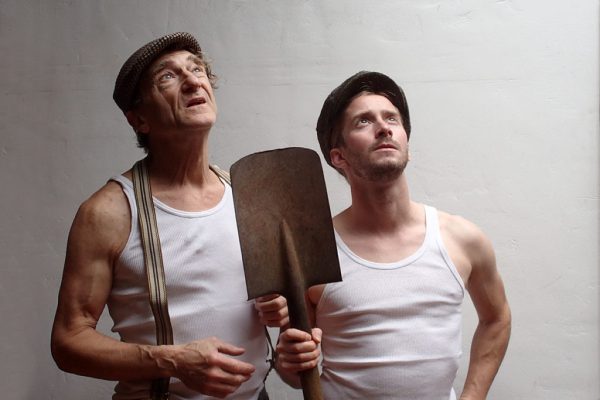 “promising the moon”
The truthfully invented story of the Keyser brothers.
For families and children 6 years and older.

DAS BLAUE VOM HIMMEL “promising the moon” is supported by:
– Ministry of Culture and Science of the State of North Rhine-Westphalia
– Cultural Office of the City of Cologne

Deep underground, the brothers dig a tunnel, but they only make it as far as the freezer in the next best cellar. Out of this predicament develops the first white lie and the merry mischief takes its course. Always ready for the next little fight, the brothers become entangled in a dense web of the improbable and the believable. They meet superheroes, mayors and the Emperor of China, a whole orchestra plays along, witnesses have to be eliminated and words of honor are sworn.
On their way back into the tunnel, the Keysers cheat and mangle their way from one phantasm to the next. In doing so, they mix up the place with anarchic playfulness and tongue-in-cheek musicality and lie to us about everything.
Behind their comical and earthy play, a memorable space is created in which the moral compass is knocked off course: Are they allowed to do that? Do you believe that? Are they doing it for real now? Is it sometimes okay to lie? Is it really true? Or is it just an act?
On the path between perception and truth, illuminating insights can be gained: about oneself and others, about authentic actions and manipulated thoughts, about false fuffs and genuine friendship.