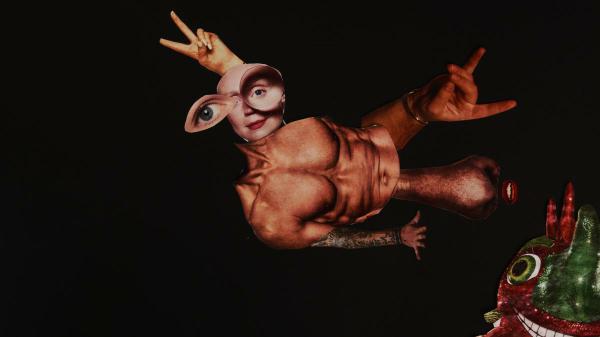 The number of spectators is limited to 40 people. Therefore, it is strongly recommended to make a binding booking in advance

Hygiene concept of the production:. As the audience is free to move around the performance, the following hygiene measures apply:

Exception: Persons who have a medical certificate stating that they cannot be vaccinated must bring a test certificate with them (24-hour antigen test or 48-hour PCR test)
Please bring the relevant certificates and your ID card.

absence#1.2 - AntiKörper by IPtanz is a walk-in dance installation for young audiences between 13 and 17 years about the disappearance, shaping and questioning of the biological body: body can, may, must, will, should not, will ... or is it not?

absence#1.2 - AntiKörper looks at questions of individuality and identity, what a possible future can look like and how it can be shaped. Two performers, two stage objects, an interactive video installation and the audience create new images and visions in each performance. IPtanz uses digital possibilities for the video installation as well as the interaction with the audience during the course of the piece. The interactive level is inspired by the principles of games and escape rooms: the audience can intervene and influence the further course of the piece through their decisions.

After each performance, members of the team are available for a discussion with the audience. The theatre pedagogue Karoline Bürger will be the moderator.

absence#1.2 - AntiKörper is another part of a series on disappearance planned over several years. The focus of the artistic consideration is the human being and his being in the interconnectedness to the disappearance of individual aspects of his living space.

About IPtanz Since 2000, the interdisciplinary group of artists led by Ilona Pászthy has been creating dance productions that can be experienced by audiences in public spaces as well as site-specific and theatrical spaces. Staged both nationally and internationally (Hungary, Romania, South Korea, Congo...), they open up the boundary between the audience and the artists and enable a direct encounter and a more direct approach to dealing with the themes. Media as well as interdisciplinary and international cooperation play a decisive role in this. The basis of their work is the cross-genre stage composition of contemporary dance, performance, visual and media art, music and the performing arts. The language of movement is strongly influenced by postmodern dance and performance techniques and a very unique body language derived from the individual gestures of everyday life. In its artistic concepts, it reflects the zeitgeist in a cross-disciplinary and socially critical way. Audience-building measures such as public talks and formats for young audiences, but also studios for young dancers, for example in Brazzaville and Kinshasa, are important components of her work, as are accessible project concepts. Her works have been nominated and awarded many times.

Cultural Office of the City of Cologne.